History of the Friends

History of the Friends

During the first ten years, the Public Relations Committee had a regular schedule of three events per year – the open house in the In November 1946, having learned that the endowment was no longer sufficient to cover the operating budget of the library, the Trustees of the Farmington Village Green & Library Association appointed a special Public Relations Committee. Its functions were to publicize library services and conduct a financial campaign. The original members were:

This group solicited 750 First District families by a letter in December, followed by another one in January 1947. Anyone who responded with a contribution was designated as a “Friend of he Village Library.” There were 477 individuals from 119 families who became the first “Friends.” Memberships were $1, $5, $10, and 25 cents for children. The committee received $1545 from the first appeal, then another $1486 from the second letter. With that money, they balanced the budget, built the outside fire escape stairway, and fixed up the basement.

The committee sponsored its first public program in January 1947, a lecture by Mabel Hurlburt on “Old Farmington  Houses,” with colored slides, held at the Porter Memorial. They also decided to hold annual open houses at the VIllage Library, each one to have a popular theme. The first one was March 1, 1947, and featured exhibits on “Old and New” in books, travel, and occupation.
There was also a newsletter, untitled, edited by Lydia Hewes, and published in May 1947. A contest was held to name future issues; and when the second one appeared in October, it was called “Book Ends,” the name it still bears.

The membership drive was the sole method of raising money for the first nine years. Each year that earned about $1500. The first mention of any other fund-raising event was in 1955, when a benefit performance of monologue sketches was given by Miss Ruth Draper at the Porter Memorial; it earned $400. Other events were held just for fun. In 1953 Farmington challenged Avon to a spelling bee and then lost! During this entire decade, Lydia Hewes served as Chairman of the committee and Sally Smith was the Secretary. In 1956 Mr. Camp relieved Lydia as editor of “Book Ends”. At left are photos of Lydia and Sally, taken later.

During their first ten years, the Public Relations Committee had a regular schedule of three events per year – the open house in the spring, one spring event, and one fall event. They also sponsored movies for children at Thanksgiving time.

The open houses were a big deal – featuring popular themes, attracting hundreds of people, sometimes famous ones. Those for this decade had the following titles:

The Public Relations Committee was now an established force in Farmington; but big changes were coming. In May 1957, plans were being drawn for a new wing of the Village Library. The construction was done during 1959, greatly increasing the space for children.

Open houses continued except for 1959; the themes for this decade were as follows:

In 1961, Lydia Hewes stepped down as Chairman of the Committee; she was replaced by Harriet Barney King (later Lidgerwood), who served until 1964, yielded to James McA. Thomson in 1965, then returned in 1966.

From archival records, members of the Friends of the Library Committee during this year were the following:

This was the decade when the open houses continued, the book sale started, Culture Caravans started, and the name of the committee was changed. The Public Relations Committee, in 1969, became what its supporters had always been called, the Friends of the Library. According to the records, the Chairmen during this decade were Hattie Barney Lidgerwood in 1967-1970, Sally Hammerberg in 1971-1972, Elizabeth Glass in 1973, and Kathy Hutcheson in 1974-1976.

The open houses for this decade were as follows:

The book sale started as a small affair on the terrace in back of the Village Library on October 12, 1973. We don’t know what the profit was, but it was a natural fund-raising event for a library group.

By now, the main function of the Friends committee was to raise funds for the library, and public relations were almost forgotten. The construction of the new Farmington Library on Monteith Drive in 1981-1982 made the Village Library into a branch and closed the West End building. The Friends gave $25,000 towards the new building and were furnishing about $20,000 per year for “goodies”, extra programs and materials, at both libraries. The annual book sale had grown to be a two-day event and was earning about $3500 by 1986. The “Friends” had also published and sold a cookbook. In 1984 a new event started—”A Dickens of a Christmas”, a house tour of a historic house decorated for the holidays. This event was co-sponsored by the Friends and Stanley-Whitman House volunteers, and it proved to be a rousing success. For the first few years, Kathy Hutcheson and Karen Wasley, leaders of the two groups, were also the Co-Chairmen of Dickens. The construction of the new library and all of this hard work on other events caused the demise of the annual open houses, the last of which had these themes: 1977 — The 30th birthday of the Friends 1978 — “Looking Ahead” 1979 — “Needlework & Needlewomen” Ruth Hyatt & Edie Hoppin, 1977 open house.

By now, the Friends committee was a well-oiled machine, which annually held two huge fund-raisers, conducted a membership campaign, and sold items at both libraries. Leaders of the committee during this decade were:

As a result of the efforts of the committee, in 1991 they won a state-wide award given by Friends of Conn. Libraries (FOCL) as the Outstanding Friends group. The book sale continued to grow, with net profits at about $8000 by 1996. In 1989 the timing of the sale was changed from fall to spring in order not to conflict with Dickens. Dickens also grew and grew and by 1996 was a 3-day event, with preview party, Teddy Bear Tea for children, and the house tour. In its heyday, Dickens was making a profit of $16,000-20,000, split evenly between the library and the Stanley-Whitman House.

The Chairmen of the committee during this period have been:

Other events held during the past eleven years include an American Girl party, more Culture Caravans, a benefit golf tournament in honor of John Grouten, a photo contest, holiday open houses, a tag sale, and the sale of several kinds of merchandise—book pins, book bags, bookmarks, ornaments, Entertainment Books, note cards, etc. In total, the “Friends” now contribute about $30,00-35,000 each year to the library for programs, equipment, and materials. Most of this support is made possible by the generosity of the townspeople of Farmington and Unionville. The Friends thank you for your help over the years, and we look forward to another glorious sixty years!

History of the Farmington Library Garden

In 2002, The Farmington Chapter of the Master Gardeners Association provided funding in the sum of $500.00 and created the garden at the west end of the library adjacent to the patio. Instrumental in its beginnings, the founding group members were John Neff, Paul Grimmeisen, Marge Bingham, Ken Bobinski, Peggy Bliss, Martha Cheshire, Sandra Goralnik, Alan Kennedy, Robert Johansen, Sandy Myhalik, and Robert Slabinski. They were joined by members of the Friends of the Farmington Library, Bobby Beyer, Carolyn Lloyd, Neil Lynch and Jessie Saxton.

In addition to the main garden a rose garden was added and has been maintained by Paul Grimmeisen, once the head of the Elizabeth Park Gardens, along with other volunteers.

The original garden boasted 109 plantings of 63 different species of plants. A plant identification notebook of the original and current plants can be borrowed from the library.

The garden serves as a place of solace for many townspeople. Weddings, memorial services, photography and music classes and concerts conducted by Leslie Imse, Director of the Farmington High School Music Department and performed by her students and other events are hosted here. In 2019, the garden was recognized by the Farmington Garden Club as a place of beauty. A plaque to commemorate this recognition hangs in the lobby of the Main Library.

In the 20 years since the garden was planted it has been maintained by the volunteers whose membership has changed some while some of its original members remain active in the group. Led by Carolyn Lloyd for many years, the volunteers are led at the present time by Barbara Javarone and funded by the Friends of the Farmington Library. 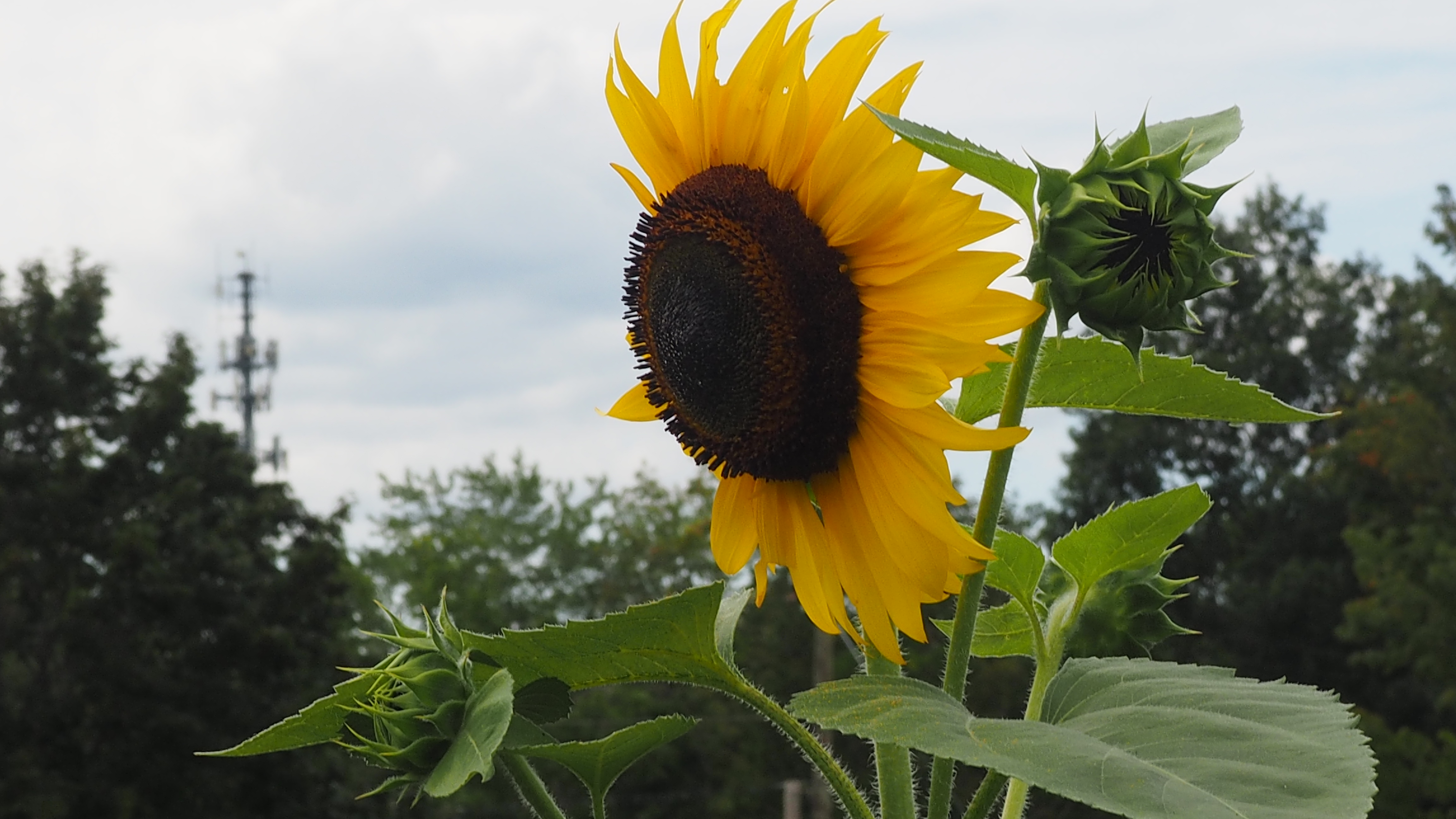 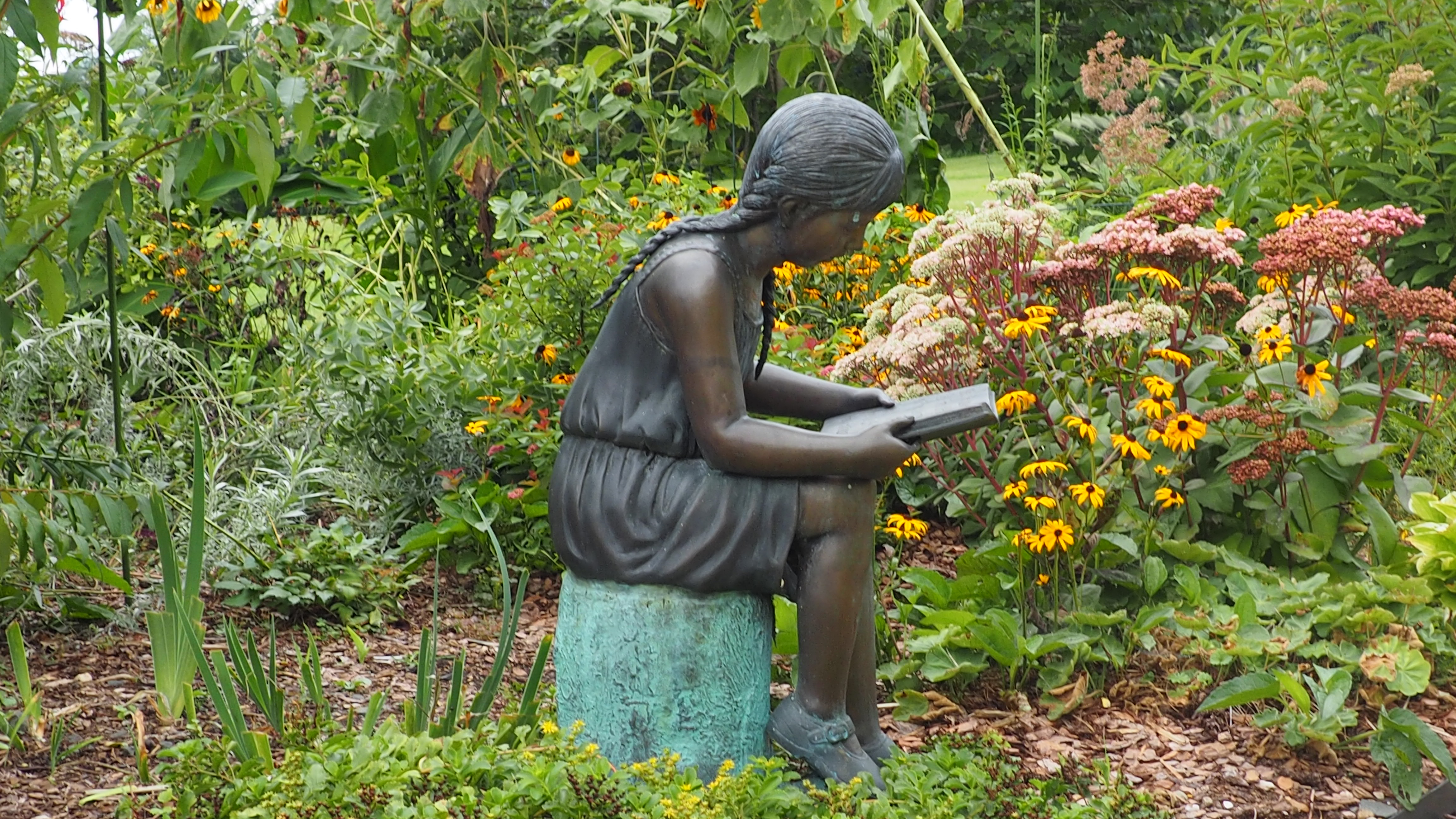 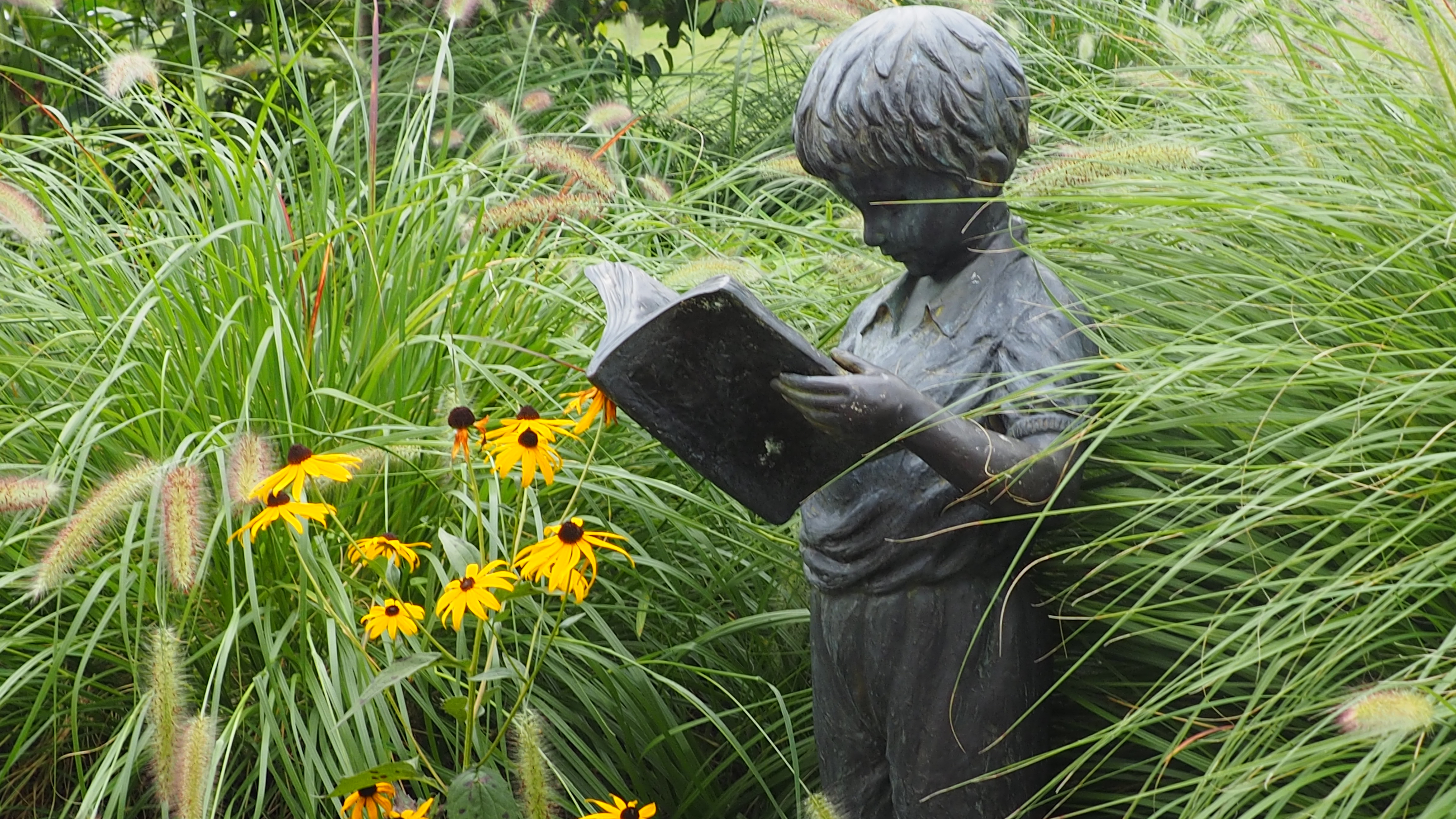 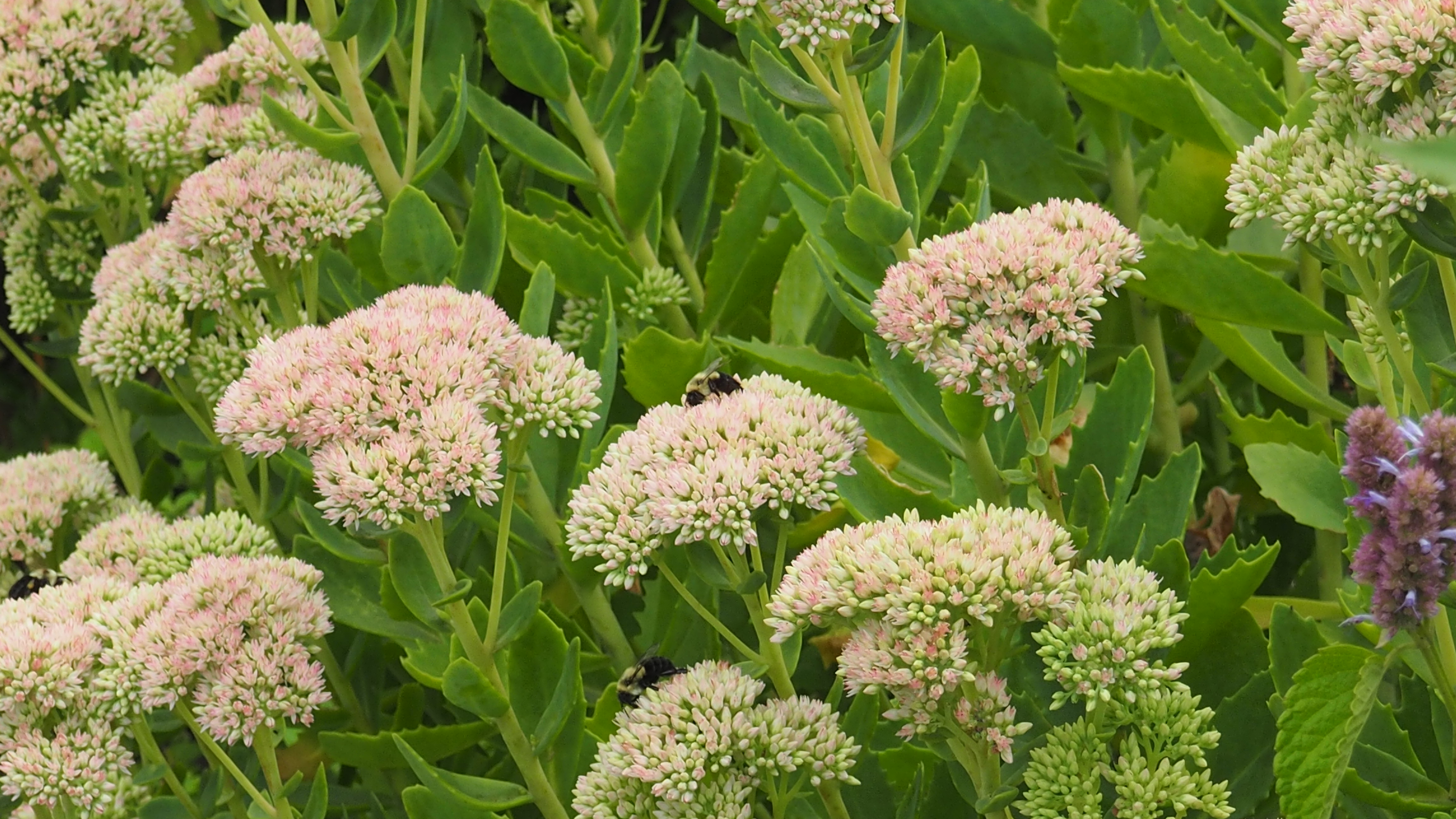